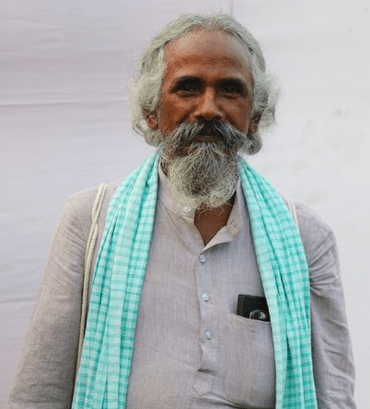 Affectionately known as Swamiji, he  hails from a small village called Peeparkhedi in the district of Dhamtari in Chhattisgarh. When he was a young man, he joined Nyogi of the Chhattisgarh Mukti Morcha as a train union activist for about ten years. After that, he helped organize beedi workers. He joined Ekta Parishad in 1988 and was the organization’s first president. His main work on land rights was with the Kawar and Bhunja tribes living around Gariband.

Swami ji tells a story about how the mining contractors did not like him helping the tribal communities and they tried to poison him. He made a narrow escape. “I’m deeply moved by the Adivasis, and the satyagraha movements led by Ekta Parishad.” Swamiji has been in all the satyagrahas of Ekta Parishad, modeling the values of Gandhi. With all his hard working recent years he became the President of Prayog.