Jai Jagat International > About Us 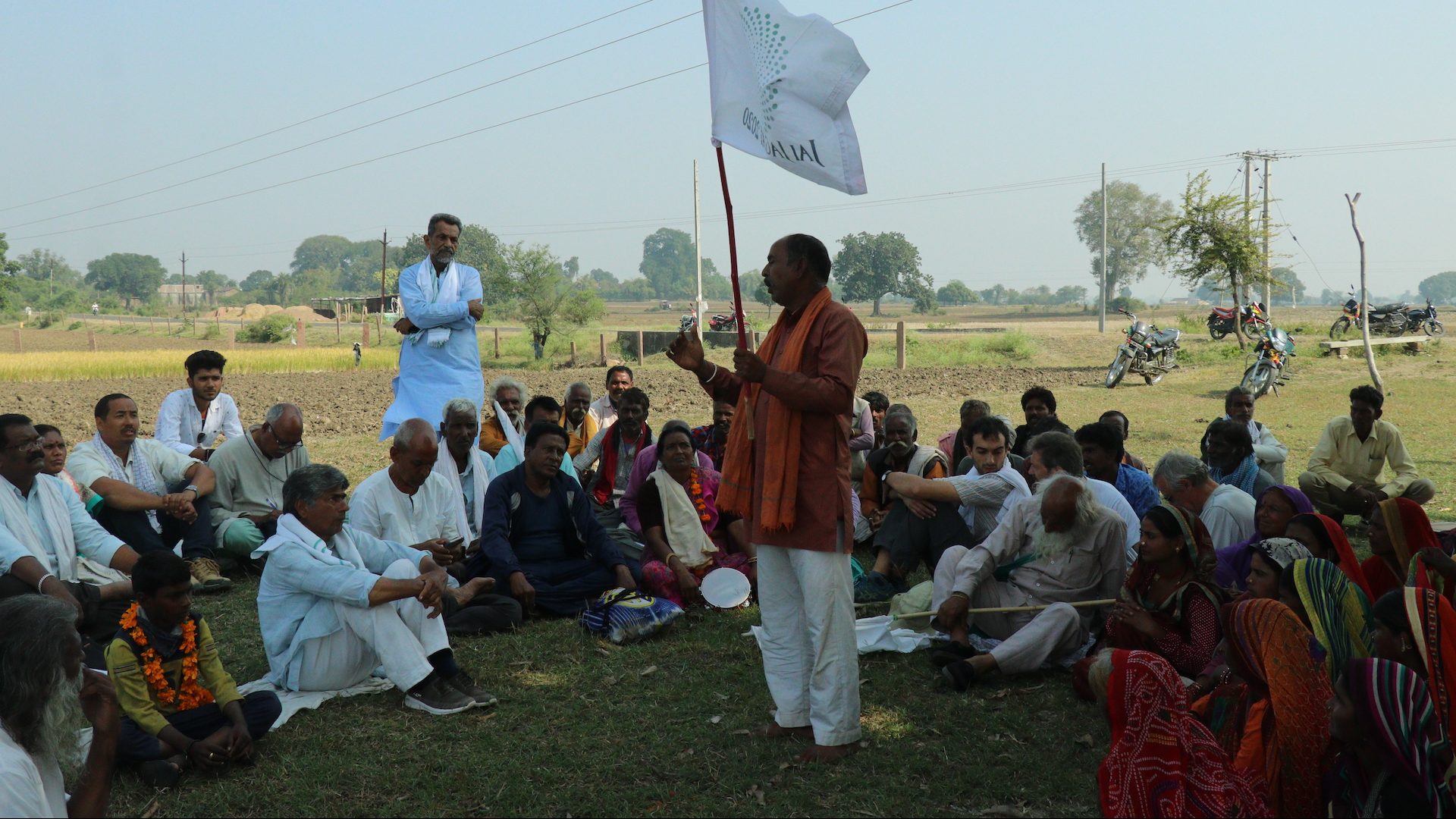 The core vision of Jai Jagat is to create a space where groups and movements can come together to make change nonviolently and address issues related to justice and peace. The urgency of having such convergence is to change global public opinion to enhance the emergence of an alternative development process that is pro-people, pro-poor and pro-nature.

The Jai Jagat draws from Mahatma Gandhi’s principle of sarvodya (social inclusion); it was formulated by Gandhi’s associate, Vinoba Bhave to mean planetary unity. In modern parlance it may be said: “All for the planet and the planet for All (Everyone)”.  Some people translate it as “victory for all” so no one is a loser but we are all winners.

The Jai Jagat campaign works from the local is central to the Jai Jagat vision. This is the place where people have the potential to have self-governing and self-sufficient communities. This can be in rural or urban areas, and if in place, it guarantees a more sustainable relationship with nature and the larger ecosystems, and enables diverse development practices that draw from individual and group actions..

Strengthening many local communities with bottom-up decision-making and inclusive development that is linked to changing global institutions like the WTO, IMF and World Bank; as well as global policies like the SDGs, assists  people to have less dependence on the state and more local autonomy.

In contrast to other such forums, the Jai Jagat is also an organization that draws inspiration from Mahatma Gandhi’s legacy, and has facilitated a Global Peace March for six months in 2019-2020 from India to Armenia. .Marches are an important element of action as they require people to suffer for their convictions and this attracts respect and solidarity. Out of these actions people begin to transform in various ways to become more nonviolent in their individual and group lives.

The Green and White Book came about as a response to the two planetary issues that pose the greatest existential threat to humankind: climate change, and the acceleration of wars and conflicts that are leading to mass migration and poverty. The Jai Jagat Manifesto refers to these existential crises in order to refocus the imperative of social action. Human beings have never before faced a situation where our survival is being threatened; and this may well be the motivator of change.

Jai Jagat attempts to instill courage by offering a vision. This vision is meant to give people, especially the young, a sense of their own power to make changes, based on individual and collective ingenuity, rather than a dependence on large external systems that are beyond people’s control. Hu-man prowess links local action to global change, but the local action encouraged in this Manifesto is to integrate nonviolence. In the case of climate, there are literally thousands of local grassroots’ innovations across the globe that have been/are being developed. However, because they are small, and be-cause nonviolence is not overtly manifest, they have not been given the required public support, and have had limited impact. Assembling such diverse initiatives on a single platform may well tip the balance in favour of local action that is working to reduce the violence perpetuated on the earth’s resources, and, in the process, ameliorate the climate crisis.

Similarly, Jai Jagat responds to the unleashing of force in many countries that are making human socie-ty pliant to authoritarian and centralized rule. Arms sales are at an all time high. Marginalizing people from the mainstream, ‘keeping people poor’, promoting social divisions, and ‘keeping people divided’ are increasingly commonplace strategies that lead to a violent political economy. Such economies need weaponry, ostensibly to deter war and maintain civic peace. In reality, the stockpiling of armaments, whether conventional, nuclear, chemical or biological, only risks a greater possibility of war.
Such violence occurs in many places, and is especially prevalent in developing countries. There is a stand-off between people holding onto natural resources for basic livelihoods, and those who need cheap resources for a kind of development that only leads to conflict. Basic human needs should be the priority of governments, particularly if industrial development involves adverse consequences such as mass dispossession from lands, loss of remunerative prices for small farmers, contamination of water bodies, and so on. The acquisition of unlimited resources for production is in direct relation to the climate crisis. The government needs to balance development interventions in such a way that people, not profit, are the determining factor.
The vision of Jai Jagat lies in the title of this Manifesto : ‘green’ for recovering a balanced relationship with planet earth; and ‘white’ for finding ways to promote peace based on justice. The Jai Jagat Manifesto is meant to inspire a form of action that enables better interaction between local action and global change .

This included both allies and those associated with Jai Jagat  in Europe that had decided to take up ten of their own marches in addition to the global peace march that was meant to travel 11,000 kilometers from Delhi to Geneva. This was suspended half-way in Armenia.. The plan was to hold a convergence forum in Geneva in late September 2020 up until October 2nd (International Day of Nonviolence and Gandhi’s 150th Birth Anniversary), and groups were planning to join from Latin America, Africa, South and South-East Asia, and North America. Because the march was suspended due to the coronavirus, it was decided to have a virtual meeting in late September until October 2nd, and then a planning meeting in December on 10th to 13th, 2020 before considering rescheduling the global peace march in Georgia in April 2021.

What Gandhi said so many years ago still stands: “Peace is not an end, it is the way”. “The means may be likened to a seed, the end to a tree, and there is just the same inviolable connection between the means and the end as there is between the seed and the tree.”

The main goal of the Jai Jagat is to transforming to nonviolence in social, political and economic structures and processes and to reflect that in human behaviour.

These are applicable at both local situations across the world and to global policy making. They are both the means and the end of sound development planning. They also give benchmarks for the local actors of civil society and the national actors of government.

The Jai Jagat movement emerged from the work of an Indian social movement, Ekta Parishad that led the struggle of marginalized people for land, forest and water rights over three decades. This was done with a large team of committed activists with its founder,  Mr Rajagopal P.V., a Gandhian practitioner who had practiced social mobilization even before Ekta Parishad came into existence. Rajagopal was deeply influenced by Gandhi and Vinoba Bhave. Through his experience of building a large social movement,  methods and techniques were developed that gave the basis for thinking of alternatives. Nonviolent movements are based on “engaging the other” rather than setting up confrontational relationships. This new form of social movement of building ‘dialogue’ with the Indian State while mobilizing large movements at the grassroots was known as ‘struggle and dialogue’.  (See mass mobilizing in 2007, 2012 and 2018 at www.ektaparishadindia.org.)

In 2012 the largest nonviolent mobilization on land reform took place,  known as Jan Satyagraha, and the following year, the Jai Jagat took these nonviolent techniques to other groups/movements in different parts of the world. Visiting thirteen countries, mostly in the developing world in the space of five years, Rajagopal and Jill Carr-Harris, the founder of South-South Solidarity, built up a network focused on action programs that was the beginning of a movement for influencing global policies. Dozens of groups supported the principles and techniques of nonviolence, because civil society was increasingly losing ground in a rising tide of nationalism and intolerance. Thus in 2014 Ekta Parishad with fifty other groups began to chalk out the Jai Jagat movement globally to commit to a common  action. The campaign was shaped around a global peace march.

In February 2019 the Green and White Booklet: the Jai Jagat Manifesto was prepared. A month later the European friends made a charter. These were meant to circumscribe the campaign. The Manifesto can be found below.

The main aim of the Jai Jagat is to transforming to nonviolence in social, political and economic structures and processes and to reflect that in human behaviour.

These are applicable at both local situations across the world and to global policy making. They are both the means and the end of sound development planning. They also give benchmarks for the local actors of civil society and the national actors of government.

We need to stop war. The UN Secretary General called for a ceasefire on all global conflicts on March 23rd.  We need to lift economic sanctions to prevent hunger. The UN Rapporteur on the Right to Food is calling for sanctions being lifted currently on: Syria, Venezuela, Iran, Cuba and Zimbabwe.

We need to cancel debt repayments to developing countries. The World Bank-IMF are proposing to cancel all external debt payments for 2020 to the 76 of the poorest countries. The debt cancellation should be extended subsequently.

Developing Capacities for Justice and Peace

People/Groups Behind the Movement

Jai Jagat is a movement initiated and carried forward by both people/groups working on the ground and those at the systemic levels for justice and peace. Detailed list of members of the movement can be found here.

Following are the list of organisations and groups that have come into an alliance with the Jai Jagat movement.

Following are the list of organisations and groups that are in support to the Jai Jagat movement.

Write to us at contact@jaijagat2020.org