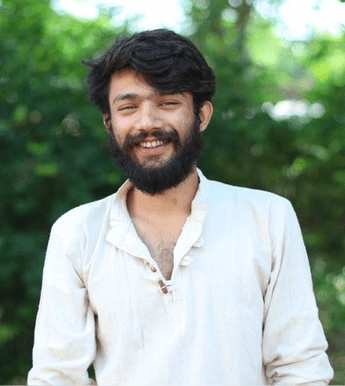 Shahbaz is a young photographer and filmmaker who started a career as a wedding photographer. He was brought up in Bhopal, capital city of Madhya Pradesh in a middle  class Muslim family with roots in Rajasthan. Being a graduate in Business administration,he always focused on monetary growth with his skills in photography. However, this changed when he became a part of a street play marathon, “Zindagi ka Tamasha”, organised by ANSH Happiness Society, that was like a revelation to him seeing the immense possibilities of performance and visual arts dedicated to social causes.

That is when, says Shahbaz, he became aware of the huge potential of the media, esp. visuals to help bring a positive change, or in the least, to help raise awareness. Photography can be an excellent medium to present images that can prompt self-reflexivity, which he believes is the actual aim of all arts. Shahbaaz had found his way.

Shahbaaz comes from a humble background, with his father working in the government department of food and beverages and mother, the house maker who loves stitching and exploring new textile business avenues, and that makes him very conscious of the struggles of middle class families. he is the eldest brother of three siblings with his younger sister due for marriage next year.

Shahbaaz has experience in working with Ekta Parishad in Youth and Land’s project, Gramrang and with ANSH Happiness Society. He was also part of thee Go Blue project of UNICEF. Reflecting on his experience working for social projects, he admits, “When I went to the remote villages of Madhya Pradesh, I saw their connection with nature, their emotional strength and I loved their way of life. One thing that concerned me was the lack of resources like land and water which they have due right to. I used to think that making money was the only way I could help the poor. However I saw and understood the many forms of poverty like lack of sensitivity and kindness”.