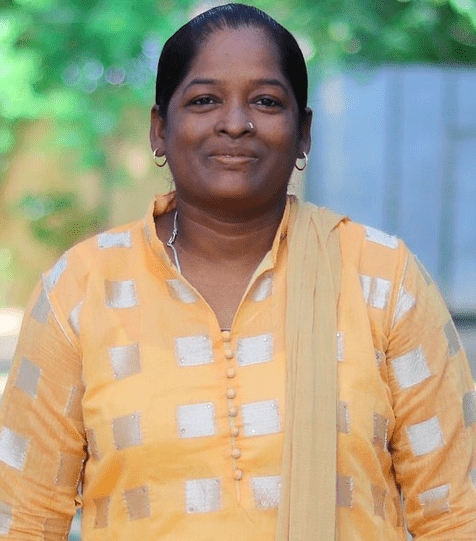 “Being at peace within ourselves and just with ones ownself, is an essential first step towards bringing justice and peace in this world.”

Nirmala Kujur was born in the Gram Chandrauti, Korba in Chattisgarh, and belongs to the Uraon tribe in the dominantly tribal belt of the state. Eldest child of 6 sibllings, her family, like most of her tribal kins have settled into farming as their main occupation.

Nirmala has an interesting history of her education which shows how she has had to make compromises for choosing to dedicate herself towards the welfare and empowerment of women. She dropped from school after the eight standard to being working for social causes. After working in the social sector for 2 years she resumed her schooling to pass high school and opted to work for a year with ‘Mitani Yojana’, a program directed at safe delivery of babies in remote regions. During which she learned the basics of medicine and started working as a health and maternity assistant.

Her interest in social work, particularly for women empowerment, saw her working for Women Self-Help Groups which was focused on women livelihood. Being from a forest dependent indigenous tribe, Nirmala took special interest in herbal medicines and even got trained for it as well. During this time she was working at a Christian run social service centre where she recollects visiting the nearby villages to collect herbs and make medicines.

Nirmla later started to work as a nurse for the ‘Holy Cross Convent School’, based in Mumbai for small children where she took care of the children. Here she started cooking for which she subsequently got a certificate testifying her cooking skills. It was then that she went on to complete her 12th in 2015. She got married but having grown under the tutelage of her liberal grandparents, she chose to abandon her marital home and her husband owing to their confining and conservative patriarchal values. Nirmala values her freedom, her ability to decide for herself and help others.

Nirmla likes to tell of her sports skills as she has been a champion helping her school win titles in kho-kho and ‘kabaddi’ besides being a much sought for folk singer and dancer with speciality in the traditional Uraon dance. A person with a cheerful and bold disposition, Nirmala’s resolve to work for the society, her fellow marginalised and indigenous people and yet her perseverance to complete her schooling despite the long gaps, reflects a strong determination and strength of character.

When her mother passed away in 2013 and though she wanted to study more, she realized that her true calling was in contributing constructively to the society, her community and for women in particular. Nirmala is grateful to her grandparents for both her formal education and learning Gandhian teachings. She was 7 years old when her grandmother got her admitted in a school. Even though her grandfather studied only till the 5th class, for Nirmla remembers that he was a visionary and taught all his children, not discriminating on the basis of gender as was the usual practice in her tribal community.

Nirmla’s family always gave her more freedom compared to other families and is perhaps the reason for her emergence as a grassroots leader. She has helped more than 400 families in getting legal entitlement to land so far in the last six years with more than a thousand applications filed ever since she began working with Ekta Parishad, fighting through nonviolent means for the rights of the adivasi (indigenous) communities over land, forest and water. She works with several adivasi communities including the Gond, Dhanuar, Baiga, and the Uraon, her own tribe.

‘I want to work for the poor. Adivasis are particularly poor and landless and I always wanted to work for their rights. Equality is very important for proper justice so women should also get legal land and homes in their names’, says Nirmala who advocates relentlessly for the legal rights of women over land which thereby she believes gives a livelihood opportunity for women. Right now in India, it is only a man who can legally own land.

Nirmala had been aware of Jai Jagat for sometime being an Ekta activist, but it was only in mid 2019 that her name was shortlisted and finalized after the first pre-march training. She confesses that she couldn’t believe it then at first and when it dawned upon her finally, her joy knew no bounds but at the same time she immediately became aware of the immense responsibility and commitment required.

“As a grassroots activists for right to land, water and forest, we have been working on small issues but we now realize how nonviolence is needed in villages. Jai Jagat will give me the opportunity to talk about these issues on a global platform while at the same time, I’ll use all the learnings from the year long yatra in my village and spread the word with proper application back home” says a confident Nirmala.