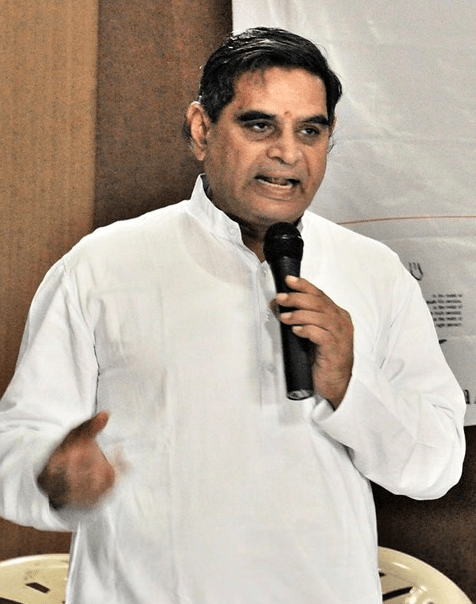 Ran Singh, the present president of Ekta Parishad, India. He confesses that he was once a chain smoker back in college who led a carefree life. However, once while attending one of Subba Rao’s, the most eminent Gandhian of the time, training program, he offered the argument that by smoking today you are spoiling your future health. This made basic common sense to him and from there upon he left smoking and resolved to do something useful and constructive in his life..

Ran Singh belongs to a region famous for its dacoits as innumerable Bollywood movies have immortalized on screen, the dreaded Chambal valley where there was no room for the law of the land but the 200 year long tradition of dacoits. This part of the valley where he was raised is called Morena and is the same place where the dacoits had surrendered their weapons in front of a Gandhi statute taking a vow to adopt a life of nonviolence. From his young childhood itself he had witnessed the life before and after the surrender and saw the entire process taking place over there.

He was moved by the influence of Gandhian values in those times. As a young smart boy, he could see the many intricacies involved in the entire process of the surrender and the after processes – political, social and cultural. – before coming across Subba Rao ji he was working as a junior research fellow in an agricultural institute, on his way to pursuing a doctorate in agriculture.

However, his life was soon to change and again it was Subba Rao who helped him do that by simply asking him as to how is the problem of hunger being solved by sitting in labs? Having known the different agricultural policies and situations of the country where there is sufficient food yet increased cases of hunger; where chemical usage in the food is being increased further and how distribution system can be improved to provide for everyone. And these chemicals are by enlarge lethal for the body, then how can they be providing more nutrition.

Seeing the practicality in Gandhi’s logic of gram swaraj, and having experienced the tough life of Dacoits in his region, he decided to join the Mahatma Gandhi Seva ashram in Morena to work for the welfare of the dacoit families, esp those who had surrendered.

As an agricultural scientist, he introduced organic khadi production in the ashram as a sustainable source of income for these families based on Gandhi’s model of Swaraj. However, during his early years with the ashram he witnessed a major setback of the ashram as it was running in loss and no new clients were coming in. The business was going to be shut. The sense of responsibility for the people for whom he was working – the poor farmers struck him hard. And as a young 27/28 year old he took charge of the ashram single handedly and worked day in and day out to sustain it. This paved the way for a rising young leader from Morena who brought back the ashram and the khadi livelihood back on track through his commitment for the people.

After several years spent in dedication to the cause of the people, he was called by Rajagopal to establish the Ekta Parishad trust. He took a couple of years to form second third levels of leadership in Morena before moving on with the works of Ekta Parishad where he is the national president today.

He has relentlessly walked all the major padyatra undertaken by Rajagopal for he believes that padyatras [foot marches] are one of the best ways of understanding what the issues of the land is at the grassroots level and gives the chance to know the problems faced by people on a personal level by actually visiting them and the discussing possible solutions, which he made sure to follow up later. For this more than 60 years man who looks too young for his age and always has a smile on his face, the whole Jai Jagat march is one way of spreading the message of Gandhi and advocating village based economy while at the same time he also sees it as an opportunity to know people and village life and their issues at a global level.