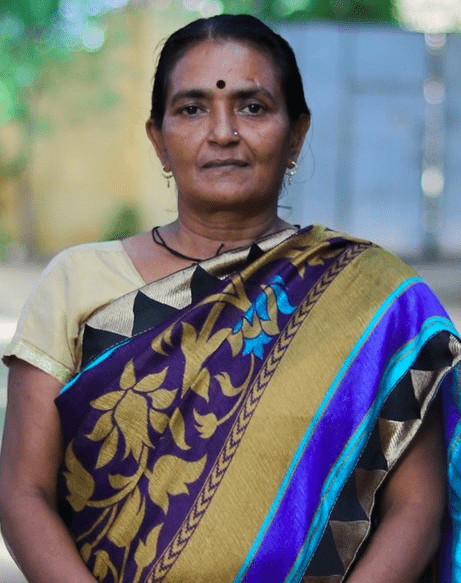 Kasturi Bai has been into many struggles, protests and many demonstrations, but she draws her strength from the decision that she took at the age of 13 . She was born in a very orthodox Brahmin family where child marriage was very common and she was married at the age of 13. She thought it was her fate to be someone’s wife and to accept someone else’s family as her own. But after her marriage, she overheard her husband saying that he wasn’t satisfied with her.

“That shook me, with fear and with disrespect. I decided to go back. It was very difficult for my family to accept that I, a 13 year old girl, could resist their decision, and could resist society.”

Life wasn’t easy for her after that,  She wanted her siblings to study but her father was a very small farmer. So She used to roll 1000 bidi ( tobacco roll) for which She used to get only 55 Rupees but She never gave up on the dream of educating her siblings.

“Everyone in my family knew my story, so a maternal aunt suggested that I attend a youth camp in Riva and I never knew this camp was going to change my life. I was introduced to Raja Ji (Rajagopal P.V.) in this camp.” She confesses how she was very shy to speak in front of 500 people but on the last day of the camp, the song she sang moved everyone. Then she joined Ekta Parishad in 1990 and prominently rose as a natural leader with excellent communication skills to suit the adivasi and local languages and mindset.

“One of the biggest opportunities that Ekta Parishad gave me was to meet more people like me, who were adamant in doing what is right. I could relate to the struggles of the poor, the marginalized ,the Adivasis and all who were suffering because I also came from the same place.”

Kasturi has faced many threats while working for the marginalized community. One of the most important incidents in her life was when she led a strike in the Satna district of Madhya Pradesh for 3 months. She had faced life threats for this protest but she was determined. And finally 84 people got the rights of their forest lands.

“I was afraid to my core, who would not be facing all these dominant zamindars, police and other officials who have their own perks and threats. But I draw my strength from that 13 year old girl who could stand up for what  she wanted.And even today after so many years, I still believe that the 13 year old girl is still alive in me, because I am still as determined as I was then. My decisions are still that spontaneous yet strong. One such decision was to join Jai Jagat. “

She has been a part of all the national marches of Ekta Parishad, that started from Gwalior towards Delhi. But Jai Jagat was even something bigger, because she is going to walk for a year from Delhi to Geneva.

“It was a difficult decision, I had many things here, I am the Secretary of an Organisation; I had my family; and other things but then I thought about the people for whom I have been working, and I realized I represent them. I represent their exclusion, I represent their poverty that they face and the violence that they face. Then I decided that I. Kasturi Patel will walk from Delhi to Geneva for the last human being of my society.”