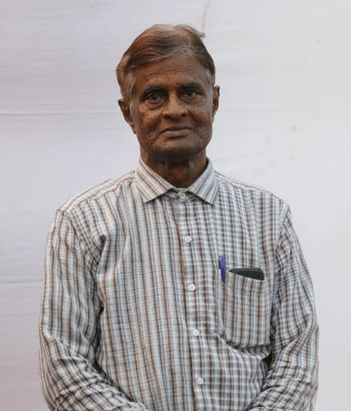 Born in a small village of Guna- Ashoknagar district of M. P. /India on 19th July 1943, Kailash  who calls himself Kailash Aadami (Human Being) considers his father to be his first master and a major influence in his life and in the formation of his personality and thought system.  was inspired by his father whom he reveres as his guru – whom he credits as the biggest reason for his interest in poetry and prose and history.  A well known personality with a scholarly background, Kailash was born to be disciplined into the profession of journalism especially as those were the times when an independent India was taking its first baby steps.

Shri Kailash Shrivastav, is also a poet and journalist and is a law graduate from Vikram University, Ujjain, which shows the man’s versatility and hunger for knowledge, considering that at 76, he is the oldest member of the core marchers, his lean frame shows his fitness which makes it hard to believe that the man is a septuagenarian..

He also cleared an Editing course from Institute of Mass Communication, Govt.  of India, New Delhi, to work in the editorial departments of Indian Express, Hindi daily Bhaskar, Jagran and  Veer Arjun. He is  founder editor/ publisher of Nirdaliya Prakashan (Publications)Bhopal/New Delhi. He is a National  Patron of Acharya kul founded by Vinoba Bhave. He is a Sarvodaya leader and had  been incharge of Gandhi Peace Foundation, Bhopal, in the year 1972.

According to Shri Rajendra Akshar President, A.I. Sahitya Parishad, Bhopal Shri Shrivastava is a true Gandhian living a very simple and ideal life.He devotes his precious time in the service of poor and needy persons of the society.He is a atheist but respects all faiths and religions.He has also devoted two decades in promoting progressive  trade unions.Famous literary magazine ‘ Raag Bhopali’  and a literary organisation Prabhat Sahitya Parishad  published special issues on the literary and social contribution of Kailashji in the year 2016 and 2019.

The 75 year old veteran journalist who was recently facilitated is also the oldest member of the core walking group. A very active and soft spoken, this smiling beacon of truth, is always active and dedicated to the cause as he firmly believes in it.