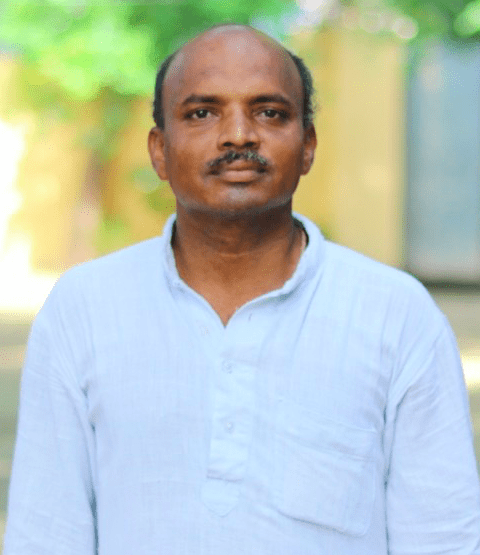 Jalandharnath, clad in a khadi kurta, spends his day in the ashram in activities like cooking, spinning, farming, and daily prayers. He is also an artist who loves playing harmonium, violin and dholak,  and can also carve sculptures on stones, wood and clay.

“My life is devoted to the thoughts of Gandhi, Vinoba and Jayprakash. I have immense faith in Bapu’s nonviolent thinking and I am seeking it within myself.”

For the past 28 years, Jalandharnath has been an integral part of Sevagram Ashram. He has been a part of organizing ‘Vinobha Sahitya Yatra”, a walk to spread the literature and ideas of Vinobha Bhave.

” I met Vishwamitre Yogesh Mathuria during ‘Vinobha Sahitya Yatra’ and his story really inspired me.” Yogesh gave him a new perspective on yatras.

Although he had done several Yatras in many states of India inspired by Sarvodaya philosophy before meeting Yogesh Mathuria, he began to do them differently. In 1994, he participated in ‘Sadbhavana Rail Yatra’ and was also a part of Delhi-Ayodhya Yatra for religious harmony. But he realised that padyatras ( footmarches) is also a space for introspection.

On the occasion of the 150th birth anniversary of Mahatma Gandhi, he walked from Pune to Mumbai and 1555 km Yatra from Johannesburg, Durban to Nelson Mandela’s Birth house, in Eastern Cape.

“There are a few concerns that bother me. Violence, is one problem the entire globe is facing today. Any field, be it services, education, politics or religion, is facing commercialization. The weak and the vulnerable have no space or future because they are unable to cope up with the violence of commercialization.”

Jalandharnath has dedicated his life to Mahatma Gandhi’s philosophy of truth and nonviolence. He is a Gandhian to his core, who wishes that the world should be violence-free, on the 150th year of Mahatma Gandhi.

“I see  a ray of hope in Jai Jagat for all the people who are seeking peace and that is why I am excited to walk. I feel this walk will have an impact at a global level and will invoke hope in everyone. It will strengthen the voice for nonviolence which is today’s need and it’s going to inspire many.”