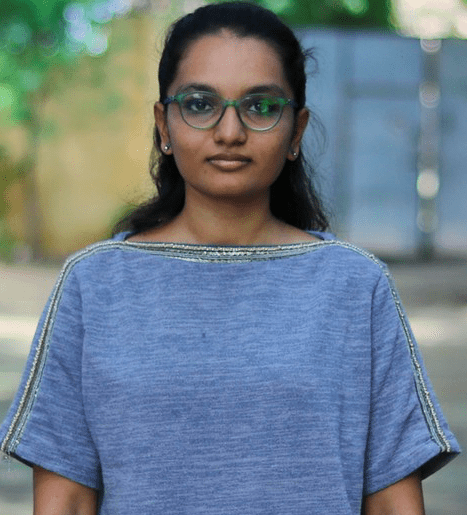 “Being part of Jai Jagat march, I’d like to carry the message of asking for an undivided borderless world and peaceful society everywhere and I wish to spread the smile that travels thousands of miles”.

Gulal Tula-Sanjay, a young civil engineering post-graduate, with roots in Mehsana (Gujarat, India) has been familiar with social activism right from childhood with her parents initiative, Vishwagram (world-village), an NGO in a rather underdeveloped village, Basna in Mehsana District, established in 1993, two years before she was born. Karunagram (village of compassion) is a part of this initiative where they support an orphanage where Gulal would often stay. She confesses how she felt envious when other children would call her mother ‘mummy’.

She reflects that growing up with 17 orphan children taught her how to live in a big family with the values of sharing and caring. This also helped her learn more from her exposure to practical lessons of life than learning through classroom based education.

Gulal recalls an anecdote from her childhood that influenced her life journey deeply; ‘One of the children, Nikhil, a runaway child, growing up at the orphanage was found on the railway-station by an NGO called Child-line. He had run away from his home because of the beatings he got from his stepmother. Once while selling snacks on trains, a job enforced on him by his step mother, somebody snatched away his snacks worth 100Rs. fearing the beating he’d receive, he had no option but to run instead.  What struck Gulal when he narrated his reasons was his exclamation, “Do you know how costly those snacks were? 100 Rupees!”.

The incident brought forth the reality of deeply rooted poverty and social inequality that pervades our society and to which few privileged children get exposed to. The story practically awakened Gulal to a life of commitment to the cause of the poor and against social and economic exclusion.

Thereon, she kept herself involved in many of the projects with Vishwagrams that her parents were moderating. At Yuvagram (means Youth-village in Hindi), she participated in life-skills camps for Youth and teachers. In Kitabgram (Book-village), she participated in activities that encouraged people to read more books that inspires self and social transformations. In Snehgram, she used to work in reconciliation and restoration processes in natural calamities affected areas across the country such as their work in Kutch (2002 Earthquake), Surat Flood (2008), Tsunami in Tamilnadu (2007), Kedarnath Floods and Nepal Earthquake(2011).

Gulal’s next venture touched the very heart of the human condition as a result of direct violence. She joined Shantigram, working for communal harmony, post the infamous 2002  Godhra riots and later for Kokarajar  riots in 2012. She understands violence and how it rips apart the very fabric of humanity that binds our world together and makes her all the more commited in redressing the ills through positive actions.

Gulal has seen the ugliness of human suffering in the microcosm of her world of Vishwagram. Jai Jagat, for her, gives an opportunity to broaden her horizons of the experience of humanity and all its concomitant miseries and inequalities at a macro level with a focus on finding solutions and alternatives while on the journey and a way of thinking that is inclusive and cares for each member of the society.

She believes that the Jai Jagat will strengthen her work in social welfare and harmony to a global platform. She, along with another core marcher of jai Jagat, organised and participated in a parallel, 57 days of 900Km long footmarch in Gujarat (Porbandar to Dandi) between Nov14, 2019 – Jan 9, 2020.

She wishes that in being a part of theJai Jagat, she will be a part of  a global initiative to bring peace and justice to this world.