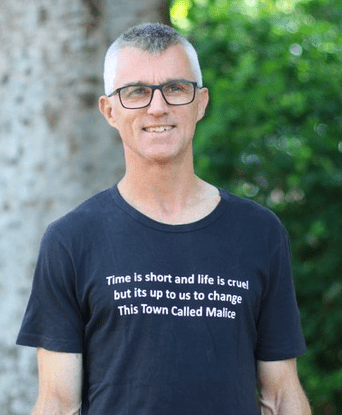 “Jai Jagat’s peaceful and communally equitable philosophies and aspirations, frame an alternative agenda of conditional sustainability, which appears realistic. Jai Jagat has a vision describing non-violence, empathy and peace. This vision delivers a world better equipped to face the imminent challenges of sustaining life to all flora and fauna’s continued existence.”

Benjamin, a New Zealander, has been living in Sydney, Australia, for the last 20 years. His great-great grandfather was jailed for his peaceful stance against sending young men conscripted in World War I, to die in a terrible waste of humanity.

His grandmother was a woman ahead of her time, a headmistress, a leader of peace, conservation, and women’s movements. His uncle walked, mapped, and oversaw, establishing New Zealand’s Te Araroa Walking Track, traversing the entire 1,300 km length of the country. He then served as the track’s CEO for ten years.

Ben is a qualified social welfare worker, experienced in facilitating children living on the autism spectrum, and those elders living with the long goodbye of memory loss and dementia. He’s on his 3rd lengthy visit to India, prosecuting a personal child welfare advocacy. He utilises entrenched ties with Australian Aboriginal  people to connect with similar generational and co-morbid dilemmas, confronted by Adivasi communities India-wide.

These Indigenous Indian people have also tended the country sustainably in nurturing custodianship, for tens of thousands of years.

Ben wishes to contribute to truth-telling and reconciliation processes with the government and those others using their power or position, to compromise humanity, lands, waters, and other environmental resources and systems.

It’s both from within this recent experience and his family legacy, that his natural inclination emerged towards Jai Jagat 2020, after a chance Delhi meeting with international coordinator, Yann Forget, in 2018.

Ben is grateful that his time in business development, management and logistics further informs his capacity to relate empathetically with the hundreds of people he commits to meeting every day on the Yatra. He feels that gaining an understanding of individual circumstances benefits the moral authority of his and their lived experience, which he’ll carry to Geneva, in his global representations.