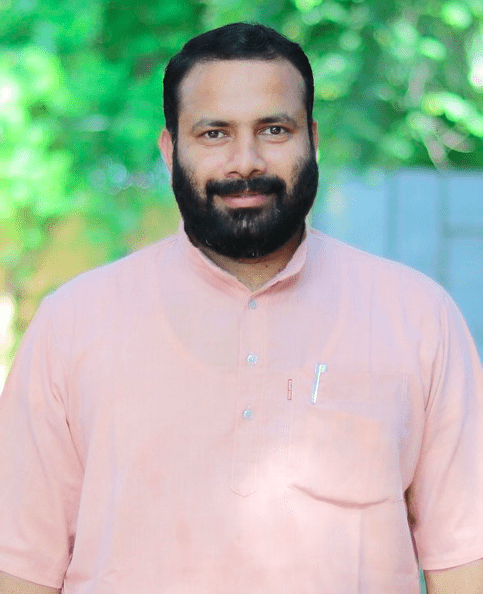 “As any other youth of my village, I was also working with a Political party but my Father wanted  me to meet Rajagopal.”

Born in a small village of Thillenkery, Aneesh Kumar is one of the National conveners of Ekta Parishad. He went to SevaGram to learn more about the Philosophies of Mahatma Gandhi and Nonviolence. “The time I spent in SevaGram gave me a nonviolent lens to look at various situations. I became close to many senior Gandhian thinkers and learned more about nonviolence from them.”.

He started his Journey with Ekta Parishad from Bihar. He was a part of a month long Padyatra, which crossed 6 districts of the state. “I fell in love with Bihar. I felt that people of Bihar are more open to join the land rights movement.”

In his initial days he faced a major challenge in communicating as he came from Kerala and the major population of North India was Hindi speaking. But Aneesh was a quick learner. He had a keen interest in Advocacy which was introduced in Ekta Parishad by Jill Carr Harris who was also one of the mentors for Aneesh.

He participated in many state level yatra and was handling Public Relations and Media in the 2007 Janadesh ( A national action by Ekta Parishad where 25000 people marched from Delhi to Gwalior )..By the year 2012, Aneesh was one of the main negotiators with Shri. Jai Ram Ramesh who was the Rural Development Minister then.

(In 2012 Ekta Parishad organised another footmarch from Gwalior towards Delhi,in which 100,000 people participated. This footmarch was called Jansatyagrah.).

” After Jan Satyagrah, I started asking myself who is going to lead this movement for change in the future. Then I realised that it is important to include Youth to build a future leadership. Following the steps of Dr. S.N. Subba Rao,started investing in Youth and built good connections in various Youth organisations across India. One such organisation was ANSH Happiness Society. He met Mohsin Khan( Founder of ANSH) via Facebook, and later they started exploring the idea of how Urban youth can be a part of the struggle by and for the marginalized communities.

“The youth comes with a lot of skills, but is unguided. It’s important to guide them towards their own transformation, then they can create a beautiful world on their own.”

Aneesh is also one of the founding members of GORURBAN campaign, which focuses on bridging  the Gap between Rural and Urban spaces. He is also a part of various international networks such as ILC Asia, Earth Trusteeship and many more. He has also been an eminent speaker and has been connecting the youth from various countries.

“When I traveled in different countries I realised that the need for today is to create a Global Family. Jai Jagat 2020 aims to create one such family and to live up to the phrase ‘vasudhaiva kutumbakam’ (the world is one family).”