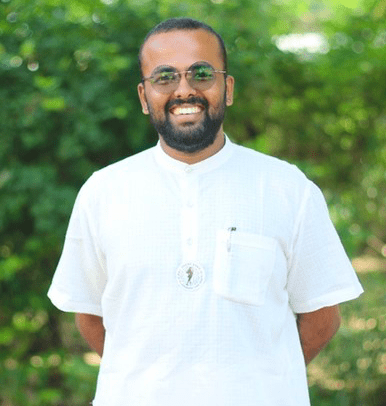 “I strongly believe Gandhi as a methodology rather than an ideology and am so happy to carry Gandhi’s message to Geneva on the occasion of Ba Bapu 150th anniversary”, says Ajit, a committed young Gandhian.

Ajit has been trained in architecture engineering, but he is more interested in social work and is an active participant in community based projects, back home in Kerala, the southern most state of India.

Ajit likes to work with his hands and has been involved in organic farming back home. One of his many qualities is his natural capacity to serve people, especially when it is about serving food. Ajit comes across as someone who has totally internalised Gandhian values of simplicity and humility and is one of the most enthusiastic and energetic walkers in the group.

Meeting with Rajagopal P.V., the eminent Gandhian, left a deep impression on him and inspired him to dedicate his life to working on and spreading Gandhi’s message.

Ajit attended nonviolence training at CESCI, Madurai conducted by Jill Carl Harris in April 2019 where he got to know about Jai Jagat 2020. Inspired by the vision, he immediately enrolled his name for the yearlong Jai Jagat yatra.

Drawing from his architecture background, Ajit launched a new venture, a sustainable construction firm, which constructs houses using mud, used timbers, and other waste and organic materials in collaboration with a small agricultural farm, just before he became a part of Jai Jagat. He is eager to develop his new endeavour after Jai Jagat 2020, and hoped to contribute to the environmental cause with his ideas of sustainable construction.